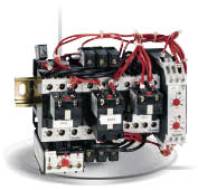 The Y-D starting is a type of motor startup at reduced voltage which is useful to start the motor smoothly, without excessive mechanical stress and limiting the start-up currents. It is suitable for motors with:

The star-delta starting reduces the starting current and starting torque to values equal to 33% (1/3) of those found in a direct starting.

It is a different way of reducing the voltage in the start-up compared to the one adopted on motors with only 3 conductors (or terminals) available, for which the voltage reduction can be made by interposing in series a resistor or a reactance that causes a voltage drop.

In the case of the auto-transformer starters, they always provide a reduced voltage. For static starters the reduction takes place by chopping the voltage wave with thyristors.

There are three contactors, respectively, line, triangle, star, and a thermal relay located upstream of the line contactor.

The starting sequence is the following:

A proper choice of the timer is essential for the star-delta starter.
The purpose of the timer is to determine both the acceleration time of the motor and the transition time (pause) in the switching from star to delta.

The acceleration time is set to a value corresponding to the time needed to reach almost the speed of the motor. A too low time causes the motor to start irregularly, and during switching to star connection there will be a current equivalent to the direct start.

The transition time, generally set at about 50ms, allows the extinction of the electric arc on the star contactor, and prevents that with the closing of the delta contactor, a short circuit occurs (albeit limited by the arc resistance). A higher time causes deceleration of the motor, with consequent peaks of current in switching to star connection.

The transition time can be useless when employing contactors of large size with high closing time and can even be harmful for those motors (eg. For submersible pumps) characterized by a very rapid acceleration (about 1s). In this last case, a long switching time causes the motor to slow down and restart directly at full voltage (star connection), loosing the benefits of the starter at reduced voltage.

Alternatively to the PLC, a traditional relay wired logic may be used. The power supply circuit remains the same of the previous solution, while the control circuit and signaling becomes the following:

Mode of operation with relay logic

When pressing PM, the coils Kl, Ks, t are activated, and the contact latching parallel to PM closes. The motor is now connected to the supply line in star.

When the delta contactor closes, it remains active through a latching contact in parallel to the normally open contact of the timer. 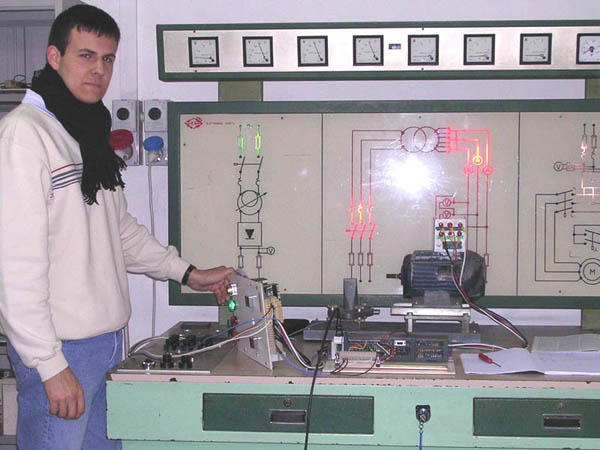 The guy in the picture is me in January 2004, testing this star-delta circuit, in the laboratory of the school in electrotecnic and automation,  ‘ITIS G.Marconi Cagliari. I was 18 years old.