This is a nice experiment to throw an aluminum “bullet” up in the air at high velocity, and demonstrate the Lenz’s law.  e= – d?/dt

The energy required for the burst is accumulated in a large electrolytic capacitor, which is charged in DC via a rectifier bridge and a small 15W light bulb to limit the current. When the relay is closed (pushing the “fire!” button), the strong current passing through the coil generates a variable magnetic field, which rejects the aluminum disc, which is projected into the air at great speed.

By pressing the “fire” button, the energy accumulated in the condenser is discharged to the coil in very short time (fractions of second) with a high power pulse. The coil is made with 40 turns of thick isolated  wire and must be flat and wide as the disc. The relay must be very robust and with all the contacts connected in parallel to distribute the current on all contacts.

The very large current that runs the coil generates a variable magnetic field, which for the law of Lenz induces in the aluminum disk one f.e.m. (electromotive force) which produces a current which in turn produces a magnetic field opposite the first. The two fields (that of the coil and the disc) are reversed and the disc is projected into the air at great speed. The aluminum disc ends up blowing violently on the ceiling with the capacitor already charged to only 90V but the charge can continue up to 300V. 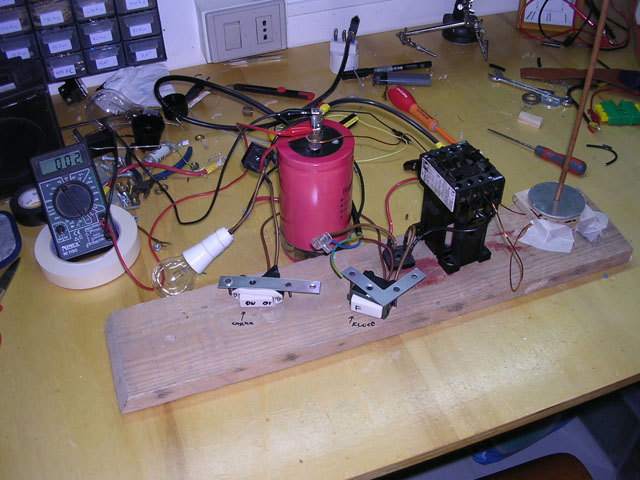 The potential energy (Ep = M * g * h) of 13 J corresponds, for a mass of 20g to 66m. Obviously, the disk will not even reach half because of the fiery aerodynamic friction of this “flat” high-speed form. In my case, with an outdoor test, the disc comes to a dozen meters with the capacitor charged to 200 V.