A bit of history of the Earth and its atmosphere

When forming the terrestrial atmosphere was completely incompatible with life because it was mainly made of water vapour, carbon dioxide, and other gases from volcanic eruptions. The temperature was very high (hundreds of degrees C). 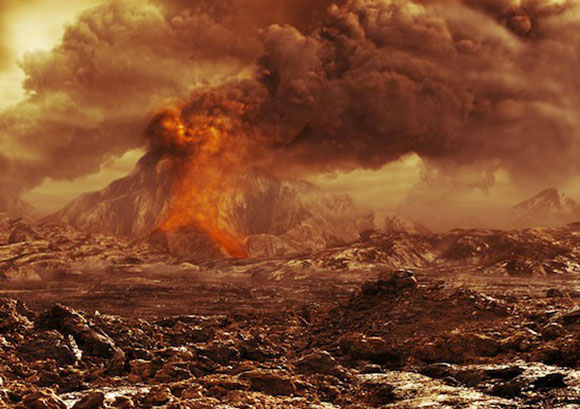 It was only when the water vapour condensed into water, and when the ambient temperature dropped to levels comparable to the current ones, the time when the first forms of life appeared on the Earth.
The atmosphere was still lacking oxygen, which appeared with the metabolism of the first living beings trough photo-synthesis of the carbon dioxide and water. The Earth’s surface was affected by light radiation from the Sun much more than now. Today, in fact an ozone layer absorbs many ultraviolet rays. In the old days the oxygen did not exist and therefore the ozone layer could not exist.

With the lowering of the temperature which occurred 3.4 billion years ago, that is after a billion years of life of the Earth, the condensation of huge masses of water vapour lead to the formation of the early oceans. This was the essential condition to create an environment favourable to life. The primitive life forms were of type bacteria micro-organisms, particularly unicellular algae, the growth of which is linked to a process of photosynthesis that split the water molecule into hydrogen and oxygen, for use in the construction of the first organic cells and releasing the second in the water.

Once the oxygen saturated the waters of seas and oceans it expanded into the atmosphere until it reached the 21% seen at present in the air. The time for this “oxygenation” process was very slow and took about three billion years. During this time the original micro-organisms have mutated so that the first single-celled algae associated multicellular algae and perhaps the most decisive event for the consequences that will have in later times, two billion years ago, the first cells with nucleus appeared. 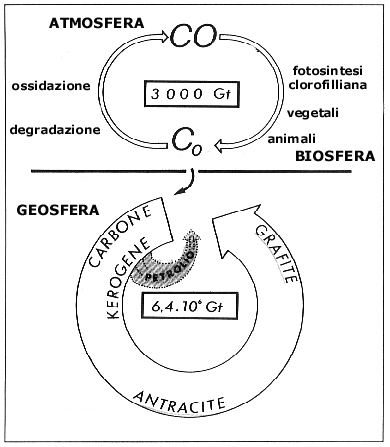 The key concept to understand before tackling the energy problem is the carbon cycle.
The biosphere is the lowest layer of the atmosphere, thick about 10 km, and is the only layer where there is life. The carbon cycle occurs within the biosphere.

Photosynthesis is the process of building the plant material that stores energy from the Sun into chemical bonds. The molecules that make up the wood (cellulose) are nothing but more complex molecules of carbohydrates, which are molecules of sugars (C6 H12 O6).
Thanks to the energy of the Sun, the molecule of carbon dioxide (CO2) is split, oxygen goes to air and carbon binds to hydrogen and oxygen water, accumulating in this binding energy.

The reverse reaction to photosynthesis is oxidation:

When hydrocarbons or carbohydrates burn (reacting with O2 from air), it has emission of energy in the form of heat and form CO2 and H2O (in the form of steam).

The hydrocarbons are composed of carbon and hydrogen. (C, H)
The simplest hydrocarbon is methane, CH4. Increasing the number of carbons are ethane, of formula C2H6, ethene (or ethylene), C2H4, and ethyne, C2H2.

The carbohydrates are composed of carbon, hydrogen, oxygen. (C, H, O)
The carbohydrates have an oxygen hydrogen ratio similar to that of water: (CH2O) n.more complex molecules are carbohydrates (sugars, or saccharides), lipids (fats, oils), cellulose.
The sugar (C6H12O6) is a monosaccharide aldehyde; the organic compound is more widespread in nature, either free or in the form of polymers. The cellulose is one of the most important polysaccharides. It consists of a large number of molecules of glucose (from about 300 to 3,000 units) joined together.

Hydrocarbons were more than 300 million years ago formed during the Carboniferous (geological period, so named precisely because during its course originated the oldest coal deposits) most of the land area was covered by a dense vegetation. This plant material, submerged by water due to the sinking of the crust, it was slowly decomposed by anaerobic bacteria (ie, bacteria that live in the absence of oxygen). Subsequently was covered with layers of heavy sediments: clay, sand, sandstones and limestones. In the course of millions of years heat, pressure and movements of the earth’s crust have compressed the organic matter, resulting in a loss of oxygen and hydrogen from the cellulose of plants and thus promoting, the concentration of the carbon content. This slow process is called carbonization.

Oxidation is the process where it binds to oxygen element to form a new molecule. It is called oxide to react if it is a metal, dioxide if it is a non-metal.
The oxidation can occur slowly (for example a piece of wood rotting) or quickly (a piece of wood burning). In both cases, during the reaction of the atomic bonds are broken and the other ones are formed at lower binding energy, the excess energy is therefore transferred to the surrounding environment.

The carbon cycle is the cycle of life

The sun’s energy is accumulated in the plants, in the form of chemical bonds. The plants are then burned, which means not only reduced to ashes by the flames, but also burned by the metabolism of a herbivorous animal, or slowly burned with stem rot. The amount of carbon that rotates in this cycle is constant. 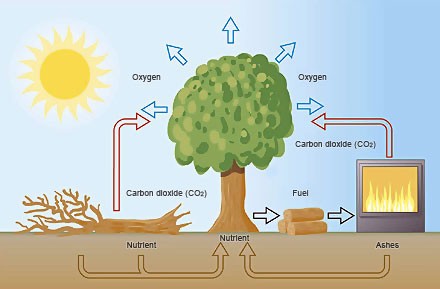 Suppose you plant a tree, and when this will be big enough to burn it. It has completed a carbon cycle.
The Sun has provided the energy necessary for the chlorophyll synthesis reaction to take place, during the combustion this energy is released, the carbon is bonded to oxygen forming carbon dioxide which is return to the air, the hydrogen is is bonded to oxygen and is returned to air in the form of steam. What remains are the ashes in the brazier, namely the mineral salts that the plant has absorbed from the soil during the growth.

If I decide not to burn the tree, combustion in a long time (or to better say: oxidation. Or even better: reaction with oxygen) will happen when the thee dies, falling to the ground and rotting.

Burning a hydrocarbon (coal and petroleum products) the carbon of the CO2 released into the air is not part of the carbon cycle because it comes from the geosphere, and then goes to increase the amount of the total carbon part of the carbon cycle. It is true that the hydrocarbons are derived from plants, but those of 300-1000 million years ago, when the atmosphere was quite different. Burn a carbohydrate does not alter the carbon cycle, while burning a carbon compound of fossil origin does.
The graph shows the CO2 concentration in the atmosphere from 800 to the present day. The oldest data come from an analysis of ancient air trapped in ice sheets in the Arctic Circle.
Human activity since the Industrial Revolution of 1800 brought the concentration of CO2 from 280 ppm to 370 ppm in just two centuries!

Today’s use of fossil energy sources is causing dangerous climate change and brings war and death.
There are technologies that can render useless and obsolete the use of the oil and all the trouble it involves.
We have to solve the energy problem, not the pollution. The pollution is the result of our backwardness in energy production.

Personally I engage in science, maintaining consistency and avoiding the use of fossil energy sources.
Promote you also sources of renewable energy such as wind, photovoltaic, thermodynamic CSP! Promote biofuels, oil instead of diesel and alcohol instead of gasoline! home heating biomass! The conversion of the energy system is possible!