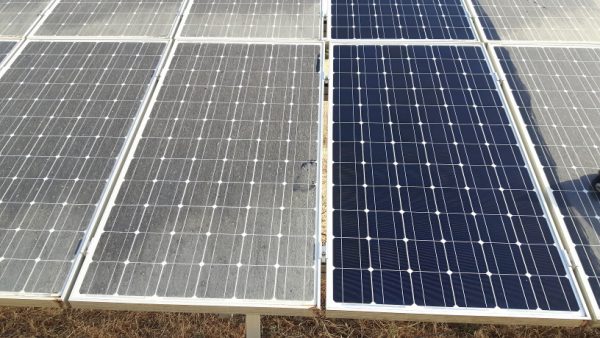 Some people argue that is not necessary to wash the panels, as they get dirty “again”, and the performance loss with dirt is small as compared to the cost of washing.

I had a feeling about the size of the lost performance due to soiling, but I could not find a satisfactory answer online. Therefore, I decided to take the measurements and do a simple analysis myself.

The photo-voltaic plant I used for the experiment is made of 3 arrays, each of which connected to a single phase 7 kW inverter, grid connected under the second “Conto Energia” (the Italian feed in scheme). Each array is made of 3 strings in parallel, with 12 panels in each string (array A) or 11 panels (array B and C). So, a total of 9 strings.

The plant was made in 2011 by Piccolecentrali Srl, the company I managed in 2009-2012 in Italy, after my MSc in Electrical engineering and before my MSc in Wind Energy at the Technical University of Denmark.

At around 10:40 I have noted down the power output of each inverter. Since the power varies a bit over time (variation in Sun radiation, operation of the DC-DC converter), I took three -almost- simultaneous measurements from each inverter and averaged them. For simplicity I just show you the averaged values in this table:

It took some time to wash the 36 panels, let them dry and reach a stable temperature. I repeated the measurements at 12:00, when the Sun had moved to a more favourable angle with respect to the panels, which explains why every array presented a higher power output.

While the power increased of about 14% for the dirty arrays B and C, the power of array A increased 24%! Of this 24% increase, we know from the other arrays that about 14 points are due to the Sun movement, therefore the remaining 10 points are due to… guess what? the cleaning! You can see it also in the graph: the improvement for array A looks larger than for array B and C. So yes, cleaning the panels gave a substantial improvement of power output. 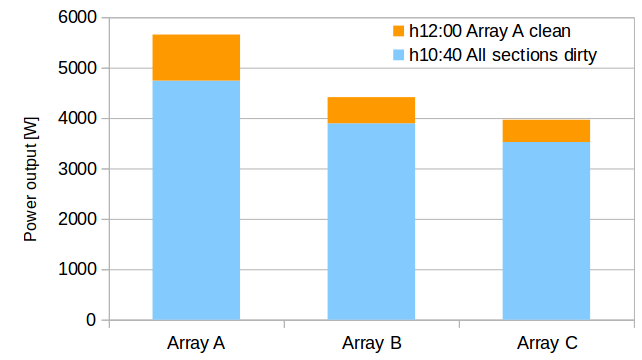 You might have noticed that array B and C exhibit a different power output (about 10%) despite being made of the same number of panels (33 panels each).

10% is too high to be caused by power mismatch (the power mismatch is a power loss which is due to the fact that PV panels connected together are not exactly identical one to another. The current of the whole string is limited by the panel with lowest current), therefore I investigated it further.

I went to the plant the day after at 9:00 a.m. to read the power output from the tree inverters.

The ratio B/C=1.013 shows a small power difference of 1.3%, which is justified by the power mismatch between the panels. So, the plant was working fine! The 10% difference that there was earlier, was probably due to different level of soiling.